A big part of learning how to work with, well, anything, is learning to name and describe all the different aspects. Once you know what something is called and what it looks like, you can find it everywhere and use it as part of your typesetting process. If you’re going for a serious and formal look in a design, for example, you don’t want to pick a typeface with typical characteristics representing playfulness informality. Or, if you’re trying to match several fonts, you typically want to combine fonts with a nearly identical look for some of a letter’s key aspects.

Although the terms are used interchangeably nowadays, and I often do so as well, I want to make the distinction here for clarity. A typeface (or sometimes type family) refers to a certain design, a certain style, a certain look. A font is one instance of such a typeface, a certain weight, size or variation on the overall theme of the typeface. A font is a single file on your computer, a typeface a large collection of font files within the same folder.

In other words, a typeface is a family of similar fonts. Garamond, for example, is a typeface, while Garamond Bold, or Garamond Condensed, or ITC Garamond are fonts that belong to it. A font is a subset of characters of a typeface. 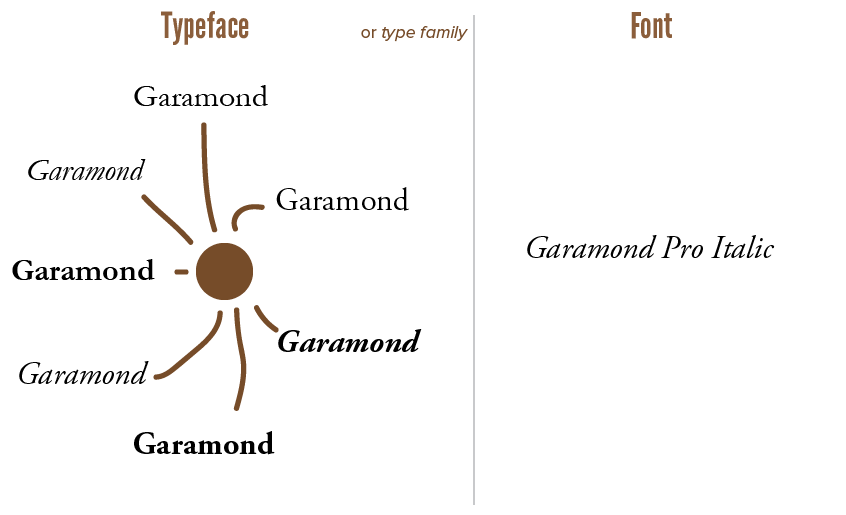 In general, multiple fonts from the same typeface go very well together, and it’s encouraged to explore all the different font styles of the same typeface before reaching out and looking for another to add to your project. I hope I also made it clear that type and typography aren’t the same; a typographer is a person who works with type to create a good design.

Just to make sure, let’s recap some basic terminology regarding type. Lowercase letters are the ones you encounter most often, and are what have created this sentence. Uppercase or capital letters are the ones you, for example, start your sentences with. They are bigger than lowercase, and usually have an altered form to make it look better and more distinct.

Additionally, a compromise between the two exists, called small caps. They have the same form as capital letters, yet the same size as lowercase letters. This makes them ideal for fitting in between blocks of lowercase text.

Every font at least supports these three types of symbols. If small caps are not natively available, however, your computer will automatically simulate them by shrinking down uppercase letters. This rarely gives you the effect you want, so always opt for using fonts with specially designed small caps embedded within them.

I said I’d start small, and what’s smaller than the parts of a single letter? There are lots of common aspects to any letter, even when the style is radically different, and on top of that there are little characteristics that ornament and define a typeface.

First, let’s look at the size and placement of letters; how do designers make type look so clean and connected, instead of just a bunch of symbols? Well, there are a few important guidelines that most if not all letters adhere to.

The baseline is the line all letters “sit on”. There might be parts sticking out at the top and bottom, but you’ll always be able to notice an overall baseline in a line of text.

The x-height is simply the name for the height of the body of lowercase letters. It’s named that way because it’s equal to the height of a lowercase x. Most of the time, fonts strictly follow this x-height, but fonts with more ornamentation or large, sweeping curves often extend a slightly beyond it.

The cap-height represents the height of an uppercase letter. It can be the same as the height of ascenders, but is often raised slightly higher. Capitals rarely have ascenders or varying heights, as it just looks messy.

Additionally, we can look at specific parts of letters present in every typeface. These need no explanation; the following image will show what they look like.

I do have to mention that modulation and counters are very important when it comes to classifying typefaces, and identifying weak or bad spots within a typographic design.

Modulated strokes simply vary line width at curves, especially at spots where several curves intersect. Unmodulated strokes have a fixed width for every stroke. Modulated typefaces are often regarded as better, though this modulation can be very subtle. The reason for this is that the visual weight is more evenly spread across a letter, which greatly increases legibility. It’s also for that reason that Comic Sans is universally hated by typographers.

CONTINUE WITH THIS COURSE
[Typography] What is Typography?[Typography] Typeface Classification
Do you like my tutorials?
To keep this site running, donate some motivational food!
Crisps
(€2.00)
Chocolate Milk
(€3.50)
Pizza
(€5.00)