Technically, a cube is a three-dimensional square, but I will use it as a term for boxes of any size, just as I used rectangle for all shapes with four corners. A cube is what happens when you add depth to a rectangle, and essentially extend it in the z-direction. Cubes can be found nearly everywhere, and are often a good way to establish the overall form of objects before adding in the details.

Because a cube is just a set of rectangles, we can use foreshortened rectangles to make it look nice in perspective. Because we can never see more than three sides of a cube – if you disagree, check for yourself – we only need (at most) three vanishing points. I already told you that parallel lines angle towards each other in perspective, and the reason for this is that parallel lines converge or intersect at those so-called vanishing points. They are nothing more than imaginary points somewhere in the distance where two parallel lines would eventually meet. You often don’t even need to know their exact position, as an approximation is enough to create accurate cubes.

So, when drawing a cube, simply establish the vanishing points and draw lines from them, and you’re done!

As you can see in the image, if you choose your vanishing points too close to your object, you get a very distorted perspective, which often isn’t realistic at all. Something you perhaps also noticed, is that the three vanishing points always form a nice triangle. After you’ve chosen two vanishing points (which shouldn’t be too close to each other), the third one should be at an equal distance from both points.

If you’re wondering why parallel lines converge, think about looking down from a very high spot, such as a mountain. Below you can see the houses and maybe even people, but they are nothing more than dots to your eyes. Because they are so far away, their shapes converge towards a single point (from your point of view). More will be explained in the chapter on perspective.

You probably noticed that I said you needed at most three vanishing points. You can remove one vanishing point, which means that parallel lines in that direction simply stay parallel. In this case, you’ll only see two sides of the cube. In fact, sometimes a cube even requires only a single vanishing point. To understand when or why this is the case, I need to talk about viewing angles.

There are three dimensions in which you can rotate, which I’ll call x, y and z. You may also call them width, height, and depth if you like. Not only can we rotate other objects in these directions, we can also tilt our own head and by doing so change the viewing angle at which we see the world. 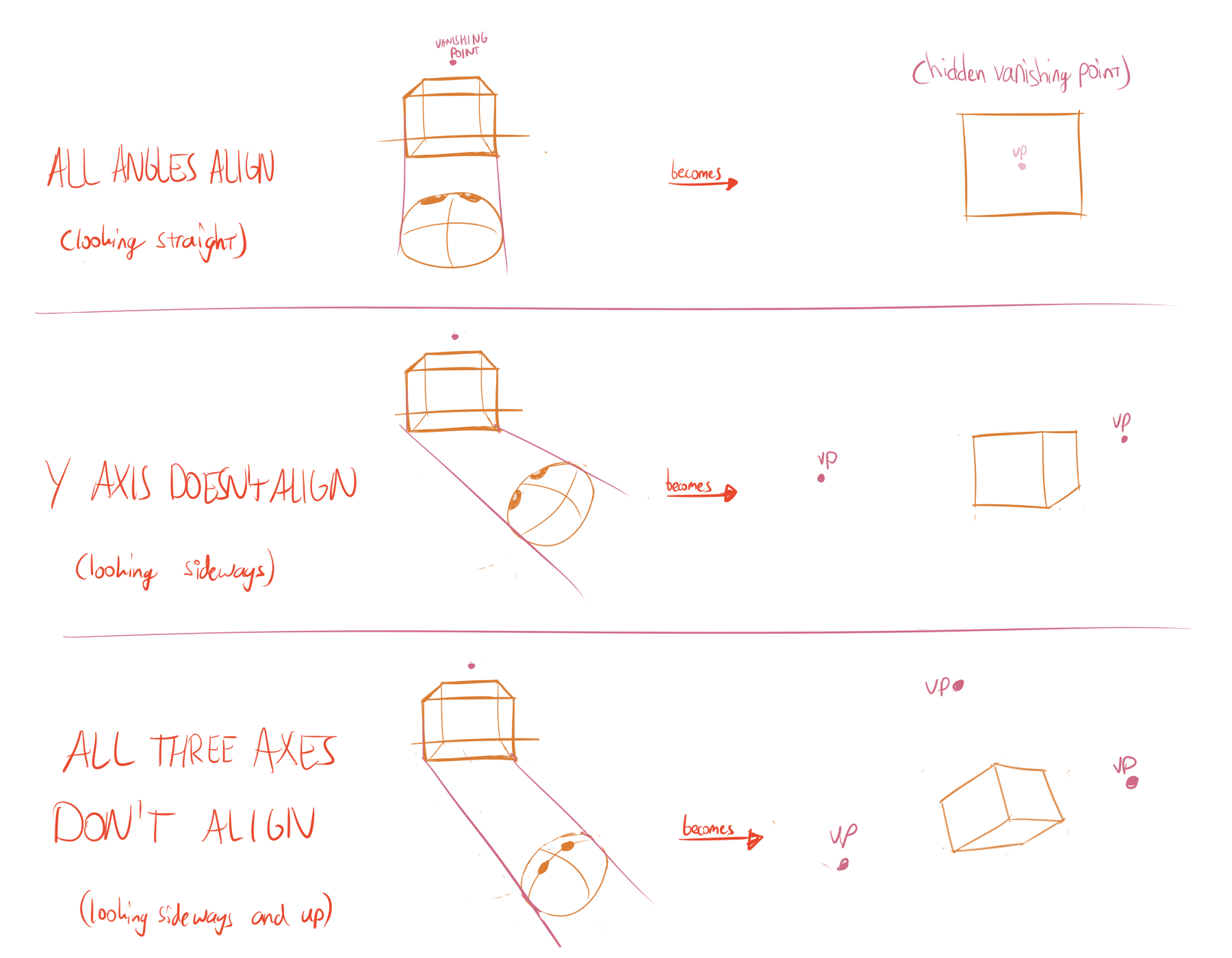 Because I already took the time to explain to you how to divide rectangles, drawing contour lines on cubes is easypeasy. Cubes have only flat sides, which means you can simply draw the individual contour lines for each rectangle shape, and you should be good.

If you’re wondering – “what are those contour lines good for?” – just think about how often shapes in the real world are cubes with holes in them or certain parts extruded. If you want to accurately morph your cube into the actual shape you were looking for, you need the contour lines to show you how the surface wraps in perspective.

One last tip I have for you is applicable to all (basic) shapes really, and especially useful if you need to draw the interior of an object (like, for example, what’s inside a box) or a transparent object. The technique is called drawing through, and it means that you draw the lines at the other side of the shape, even though you’re not actually going to see them all. This helps build an understanding of how an object is build, and makes it even easier for you to add details.

These exercises will generally take a bit longer than the previous ones, but I still suggest you practice drawing your cubes every day.

Place four dots on the paper, making sure that two of them are on the same horizontal line, and the other two on the same vertical line. Connect them with lines to get a hugely distorted rectangle, which represents the top of the cube. Now draw the rest of the cube.

This is kind of the reversed way of drawing a cube. First, you draw the division lines, and then you use them to create your foreshortened rectangles.

Place one, two or three random vanishing points on the paper. Now draw the cube that results from them.

Draw a random cube. Now divide all the sides, and connect a smaller cube to one of the subdivisions. This one takes some practice, but is extremely useful. Once you get better, start adding more and more cubes, and maybe even some variations.

CONTINUE WITH THIS COURSE
[Drawing] Construction & Form[Drawing] Spheres
Test your knowledge with the quiz!
What happens when you use drawing through the cube?
A
You establish the amount of vanishing points
B
You create open boxes
C
You draw a subdivided cube
Do you like my tutorials?
To keep this site running, donate some motivational food!
Crisps
(€2.00)
Chocolate Milk
(€3.50)
Pizza
(€5.00)