Ball control is a very important aspect of foosball, which is why it’s sad that most people forget about it. Most new players exploit the method of just trying to shoot every ball that comes near their rod at goal very fast, but that’s wrong. Against another newbie it might score quite a lot of goals, but once you play a bit longer you’ll notice it’s not the best way.

What you need to learn before you can do anything, is being able to quickly control any ball that comes near your rod. This not only means that you can efficiently defend any ball coming towards you, but it also makes you able to set up certain kinds of shots or passes.

In ball control, we can distinguish 2 styles. The one is just moving the men around the ball so that it stays in your possession, the other one is called ‘pinning’. When you pin a ball, you trap the ball between the toe (or heel) of your man and the field, so that in a split second the ball is stopped completely. Many people recommend you learn this method first, but actually I’m against it.

Why? Because pinning a ball is a one-chance thing. If you miss your pin, the ball just continues to move towards your goal/opponent at the same speed. And to make it worse, the defender of your team probably expected you to have the ball, but you don’t, so that’s one goal against you. Therefore I recommend that you first develop a feeling for how much pressure to put on a ball, and how a ball moves and behaves with different touches.

But remember: ALWAYS keep a ball in your possession. Once you have a ball, never let go of it, because in foosball your opponent can score from any part of the table. In real soccer, losing a ball to your opponent is already quite bad, but imagine what could happen in the dangerous game of table soccer…

1. Knowing where the ball will end up.

The first skill in ball control is, of course, actually getting the ball in your possession. To be able to do so, you must be able to instantly put your men where the ball will end up. This requires some training, for which we have the following exercises:

A tip: angle your men a bit backward, so that a ball is slowed down very much when it hits your players, that way it’s easier to control the ball and it doesn’t bounce away.

2. Keeping a ball in your possession

The next thing you want to learn is keeping the ball in your possession after you’ve had your first touch.

The basic rule is that you always keep in mind where a ball will go. If a ball from the right is stopped by your man, it will of course bounce back to the right a bit. If a ball is traveling diagonally downwards the table, you know that once you hit the ball it won’t just neatly bounce back in front of you, so prepare for that.

A really good defender will always be able to make any ball coming towards him bounce off in such a way that (s)he keeps the ball. For example, I once played against a really good defender, and every angled ball that hit his defenders, would bounce off vertically to his other defender, so that he almost always immediately had an open shot at goal.

A tip: there are basically 2 ways to keep a ball in your team. The first one is the safest one, the second one is harder but much more difficult for the opposing team to handle.

The first method can be applied to all types of shots: angle your men backward, and just follow the path of the ball until it stopped at your feet.

The second method is different for every shot. 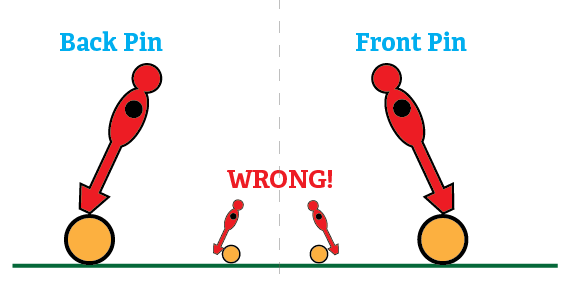 Once you’ve mastered the basic controls, and you (almost) never lose any balls anymore, it’s time to go advanced, and make sure every ball coming towards you is immediately in your possession. This is where pinning comes into play.

As said earlier, pinning is when you trap the ball between the toe/heel of your man and the field. As long as you don’t lift your man, the ball isn’t going anywhere. Therefore, if executed properly this is the best way to catch any ball and then keep it in the team. However, at first it’s very hard to get the right timing when trying to pin, but with the following exercises you should be able to master this craft!

CONTINUE WITH THIS COURSE
[Foosball] Fundamentals & Rules[Foosball] Passing
Do you like my tutorials?
To keep this site running, donate some motivational food!
Crisps
(€2.00)
Chocolate Milk
(€3.50)
Pizza
(€5.00)