A great defending team always wins a foosball match. Because, if a team effectively takes away all the possibilities for the opponent to score, they will not get any goals scored against them, which in turn automatically makes winning a lot easier. And in foosball, every moment the other team has the ball, you should be defending.

What I’m saying is: the person holding the midfield and attackers has an equally important defensive position as the person holding the goalkeeper and defenders. Below I will show you different situations in the game and the best way for the defending player to behave/move. The attacking player’s duties will be discussed next chapter.

If you’re holding the defending rods, you should always be alert. Wherever the ball is in the field, there’s always a good chance it will come flying towards goal. Your goal as a defender is: any ball that comes near your 2-rod (the defenders) should be stopped and controlled there. Most of the time, a shot will end up hitting the wall next to your goal or hitting your keeper and bouncing off, and then you need to be able to keep that ball in possession in the defensive area.

In short, what you have to do is: check out which possibilities the opponent has to score, and try to cover the easiest shots (when you’re able to draw a line from the ball directly into your goal, that shot is so-called ‘open’). This way you either force your opponent to shoot a ball which will never get into the goal or to try and shoot a very difficult shot (which will most of the time also just make the ball end up in your defensive zone because he failed).

When the ball is somewhere around midfield or further up the field, there’s the following setup ( = set of rules for yourself) you can use as a defender:

If the defender’s vertical position is within the range of your goal, there are straight shots available which you need to defend. This can be done by placing your men about one cm apart, and aligning this gap with the straight shot the opponent can make. This gap looks like an open shot, but is too small for a ball to actually go through it.

Now there are only a few options left for the opponent: shooting a quite difficult angled shot precisely into the corner of the goal, or pulling/pushing the ball and then shooting it straight (which is even harder to do), or shooting it via the walls (which is almost impossible). However, most options are blocked, and if your midfield + attacker rods are also defending, the opponent should never be able to score from this position.

It depends a bit on your qualities and your playing style whether you should rotate your men a bit on this one or not. Why? If you rotate your front man a bit backward, so that its toe is pointing forward, the man has a bigger range of shots it will intercept, but if it hits the ball, the ball will most likely bounce off to the opponent’s 3-rod. If you rotate your front man a bit forward, with toe pointing at your own goal, it has a smaller interception range, but each ball it intercepts will stay in your possession. You have to ask yourself the question: are my reflexes quick enough to make up for that loss of range? 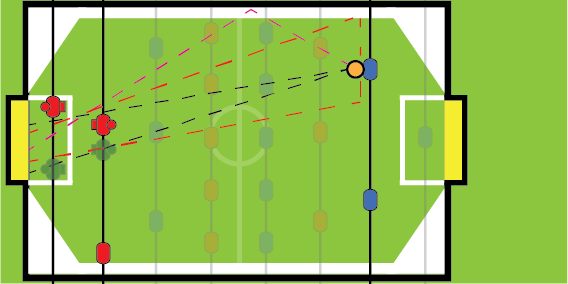 (The vague dark green men in the picture show the best setup for if the ball is on the lower part of the table) If the opponent has no straight option available, it can only try angled shots at goal. In that case, defending the near post is always the best option, as seen that getting the ball there is much easier than in the far corner. There’s also an option available for the opposing team to shoot between your 2 men, but this is an almost impossible shot from that far.

In this case though, pushing/pulling the ball is a much easier thing to do, and many goals are scored this way from the defensive line. With the setup shown above a lot of these push/pulls are guarded, but you still need to keep an eye open for these kind of shots. Those shots are usually a bit slower, so if you see one coming you should have enough time to move one of your men to that ball. Any other shot: do not move your defences.

Defending against the 3-rod

Now, if the ball is on the opponent’s 3-rod (attackers), things get a little bit trickier. The distance between the 3-rod and your goal is not so big anymore, which makes a lot of ‘easy’ shots available. Though, the techniques described above are still the best way to defend, so you’ll also need to apply those when defending against the 3-rod.

Therefore, the only way to really excel in defending here, is to first of all have great reflexes and positioning, but most of all use  psychological defense.

Why the reflexes? Well, with every change of position of the men, or the ball, you need to instantly know what to do and setup your defences correctly.

But, a better way to defend is to not let your attacker control you, but make the attacker do as you wish. This is called psychological defence, and it takes some experience (and a bit of poker face) to get used to it.

Because once your opponent has seen your defence, he probably won’t look again and will start looking for a different shot than a straight one. That will give you an opportunity to stop covering the straight shots (which is what your goalkeeper is doing), and start covering all other shots (with that same goalkeeper of course). 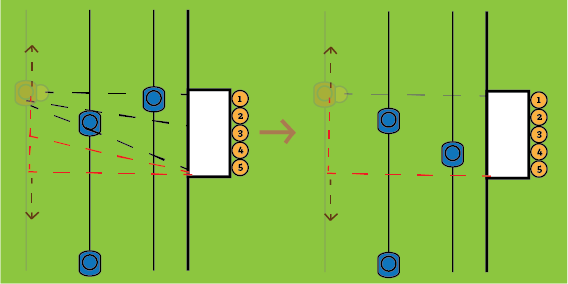 This of course only works for the middle man of the 3-rod, all other men on the rod don’t have any straight options available, and are less likely to score, which is why a somewhat professional attacker most of the time brings the ball to the middle man.

First you see the best possible position for your men to be in, and an attacker with (roughly) all its scoring opportunities. If someone has checked out your defence and saw that a straight shot is hopeless, he’ll soon spot an open gap and try to get it there. That’s the moment where you subtly move your keeper to the other side (and your defender a little bit upwards to make it look like the straight shot is still covered, just in case), so that almost all holes are covered. And the attacker probably won’t see the straight one.

The reverse is also possible: make it look like a very easy shot can be made, but in reality have it covered. An example of this could be where you leave a certain shot just open, and when the attacker shoots you quickly close it (and because it was ‘just’ open you can do this very rapidly, because you don’t have to move much).

CONTINUE WITH THIS COURSE
[Foosball] Shooting[Foosball] Defending with midfield + attackers
Do you like my tutorials?
To keep this site running, donate some motivational food!
Crisps
(€2.00)
Chocolate Milk
(€3.50)
Pizza
(€5.00)