With shooting it is really a trade-off between accuracy and power. You can shoot a ball blazing fast, but then you lose control and won’t be able to aim it accurately. On the other hand, there are shot types that have a certain speed limit, but are very hard to defend against yet easy to place in the corner.

There are 3 main ways to shoot a ball:  wrist flick,  handle roll  and  backflip.

The  wrist flick  is the most standard shot that everybody knows. It’s basically just throwing/flicking your wrist down while holding the handle, which makes the handle quickly rotate.

Do not flick your hand down, as this just puts pressure on the rod and makes twisting it harder. Think of it as turning your wrist until it can’t be rotated further, it ‘locks’. This might sound dangerous, but it really isn’t. So when doing the wrist flick, just rotate your wrist with all the power you have until it can’t go any further.

The  handle roll  can, if trained properly, be executed just as quick and precise as the wrist flick, but it’s a much faster shot. A handle roll means, as the name implies, rolling the handle in your hand. For this to happen, you need to partially let go of the handle, and only let the palm of your hand touch it. Now, without losing touch, you can roll the handle, making your man swing. This can be done very quickly, the only difficulty here is switching from your normal grip to a handle roll (but as I said, training is the key).

The  backflip  is a blazing fast shot, but requires a lot from a player to be executed properly. You need to switch to a difficult grip, the timing is different, and control is almost impossible without a lot of practice. Anyhow, the fun thing about backflips is that they are so fast that the opponent could never react in time, and even if you miss it makes the ball do unexpected things. To do one, your hand needs to let go of the handle, and only let your wrist touch it. If you then quickly move your hand up, until you’re able to grab the handle again, your man should have made a full flip. This is allowed, as seen that it hits the ball just before the full flip is done.

Shooting (on goal): a few examples

Once you know the different techniques available, it’s time for you to start being creative. There are numerous ways to shoot on goal, which mostly depend on your position on the field and your opponent’s defence.

We shall first discuss the possibilities for your  ATTACKER  rod: The  snake shot:  start with the ball in front pin for your middle man. Then slightly move either left or right, lifting your man off the ball in the process, and then at a certain moment (usually you’re your man is as far right or left as it can be) shoot straight at goal. Can be done with a backflip as well.
The  push/pull shot  (using your outer man): start with one of the men on the outside of the 3-rod, and the ball inwards. Then move the ball towards the middle a bit (keep the ball close to your man!), and then shoot at an angle (towards the far post) or straight (into the near post).

The  spray shot:  any angled shot is called a ‘spray shot’. Angled shots are very hard to defend against, but are also very hard to master as an attacker. The angle of a shot is determined by the angle a ball’s traveling in the moment it’s released from the man. Once the ball is released, it will always keep traveling in the same direction until it hits something. That is, unless a certain effect is put on the ball, but it’s very very hard to consciously put an effect on the ball. 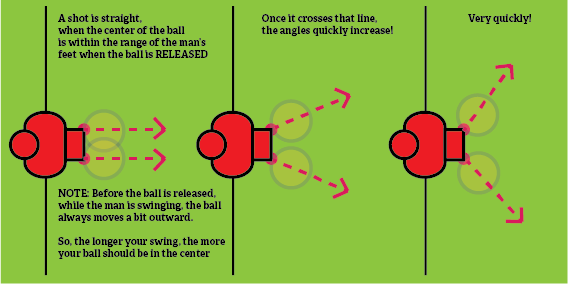 And now that that’s discussed, you of course also want to know what the possibilities are for your  DEFENDERS  rod to score:

CONTINUE WITH THIS COURSE
[Foosball] Passing[Foosball] Defending with goalkeeper + defenders
Do you like my tutorials?
To keep this site running, donate some motivational food!
Crisps
(€2.00)
Chocolate Milk
(€3.50)
Pizza
(€5.00)